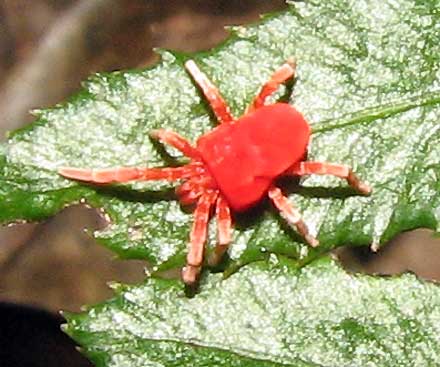 Trombidiidae is a family in the order Acarina. This specimen was photographed in Lamington National Park.

Unfortunately we can't put a genus to this Red Velvel Mite, it is usually necessary to slide-mount a mite such as this to identify to genus.

Several genera are big, short-haired and red; the most diverse genera in Australia are Allothrombium (5 species) and Parathrombium (11 species).

Despite being large, red-velvet mites and their kin are poorly known. Working on them is difficult because of their life-cycle. Larvae are parasites on insects (often looking like orange or yellowish balls). They then drop off, have a resting stage, then emerge into an active nymph stage. After another resting stage, they become adults. The nymphs and adults are predatory.

Matching larvae and adults has been done for just a few species, so most names can refer to either the larva or the adult.

It is probable that the 31 described species might represent only about 5 per cent of the actual Acarina fauna in Australia. As of August 2007 Australia did not employ any acarologists full time (Ron Southcott, Australia's expert on the Trombidiidae, died in the 1990s), so it is likely that species in the family may remain undescribed for a long time to come.

(Thanks to Owen Seeman, Collection Manager: Arachnids, Queensland Museum for this information.)

Back
View My Stats