A small to medium bark dweller in subfamily Hadrotarsinae in inland Australia and on the east coast (probably Australia wide) on vegetation. in 1896 Rainbow described the female as Pachygnatha superba but there is no described male despite it being very common and easily found. Rain coimmented this was "a remarkably beautiful spider, the silvery granules that decorate the superior surface of the abdomen appearing like jewels against the back-ground of dark brown." Rainbow thought it belonged in Araneidae, not Theridiidae. This spider may hunt on and under bark, but probably is also a wandering predator on the ground. Mascord (1970) records the egg sac as about 6mm of white fluffy silk under bark and the non-glutinous eggs as .7mm in diameter. The species name means superb and probably refers to the size of this species compared to other Euryopis. However this northern hemisphere genus may be inappropriate for Australia and our species may be transferred to Emertonella Bryant, 1945. ♀ 6mm ♂ 3mm 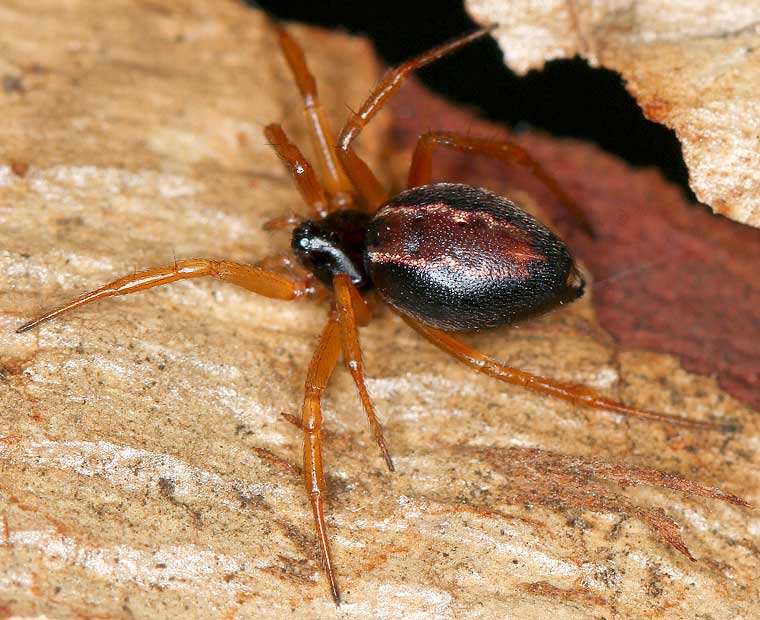 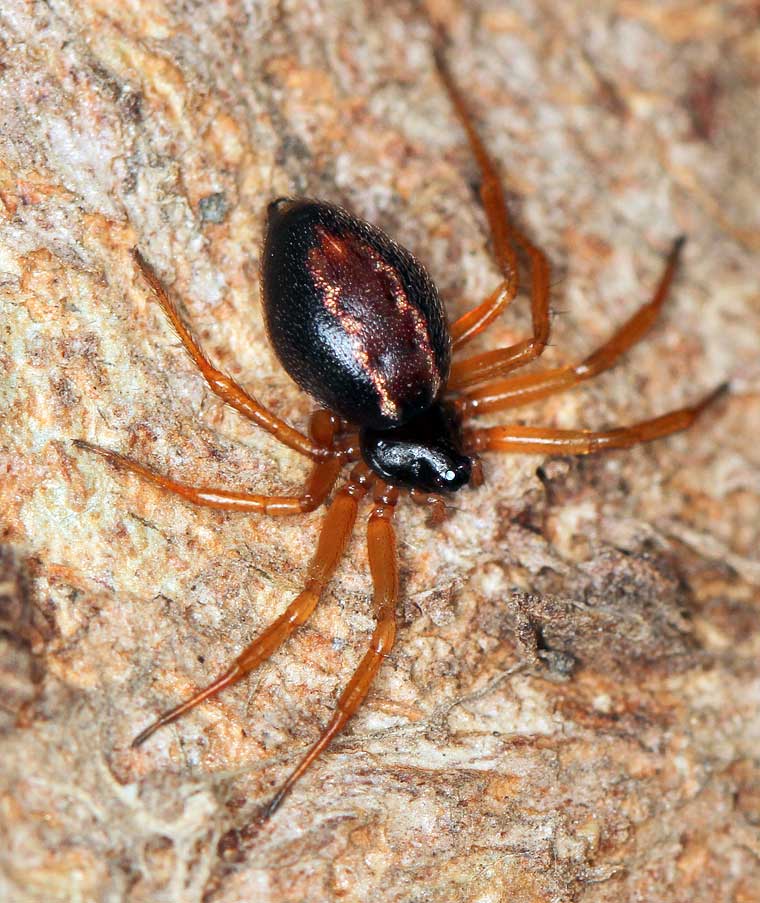 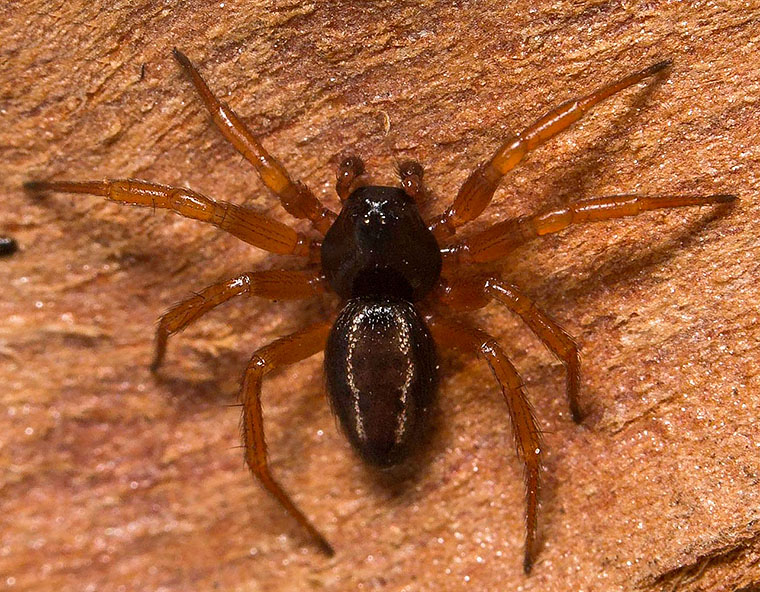 Male from Bordertown South Australia, side view on white background 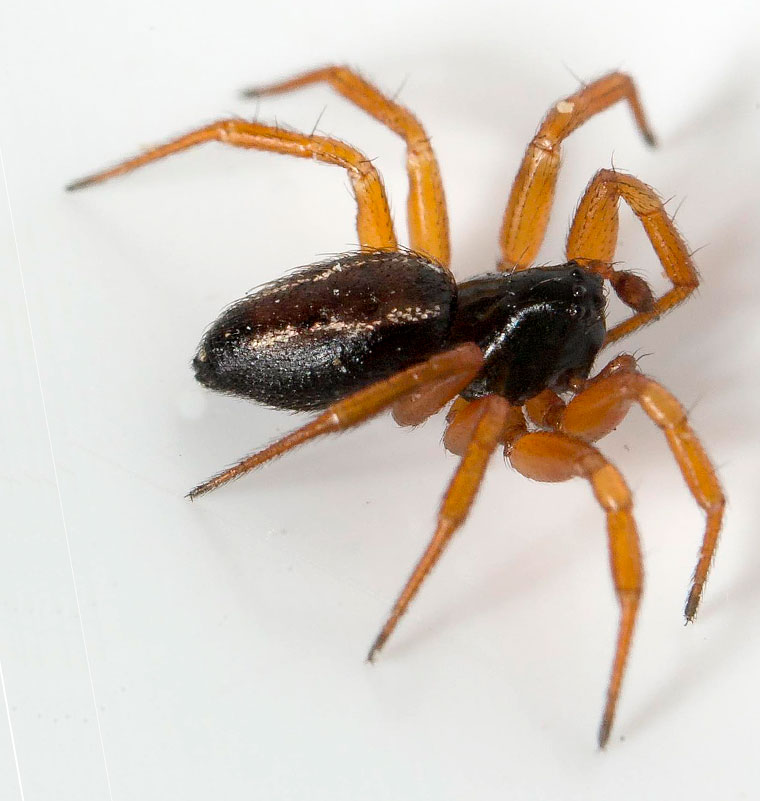 Pachygnatha superba, sp. nov. (Plate XLIX., fig. 2.) Cephalothorax 2 mm. long, 1.5mm. broad; abdomen 4 mm. long, 2 mm. broad. Cephalothorax dark mahogany-brown. Caput slightly elevated, arched, normal grooves distinct; a few long hairs surrounding ocular area. Clypeus broad, arched. Marginal band broad. Eyes of an opaline tint, arranged in two rows, slightly curved forwards; the two centre eyes of the front row are rather close together, and are separated from each other by a space equal to once their individual diameter, and those of the second row by a space equal to one diameter and a half; lateral eyes close to each other also. Legs moderately long, pale yellow, clothed with long yellow hairs, and armed with a few long, fine spines. Palpi similar in colour and armature to legs. Falces dark mahogany-brown, divergent. Maxillae concolorous, arched, inclining inwards. Labium concolorous also, rather broader than long, arched. Sternum cordate, concolorous, smooth, slightly arched and furnished with a few short yellowish hairs. Abdomen ovate, boldly projecting over base of cephalothorax. Colours: running down the centre from anterior, and terminating close to posterior extremity is a broad pale yellowish patch, slightly broadest in front, moderately and finely punctated; the patch is broadest at its anterior extremity and bordered in front and laterally with a sinuous line of bright silvery granules; laterally the colour is dark mahogany-brown; inferior surface brown, but a shade lighter in tint. Epigyne a simple transverse slip. 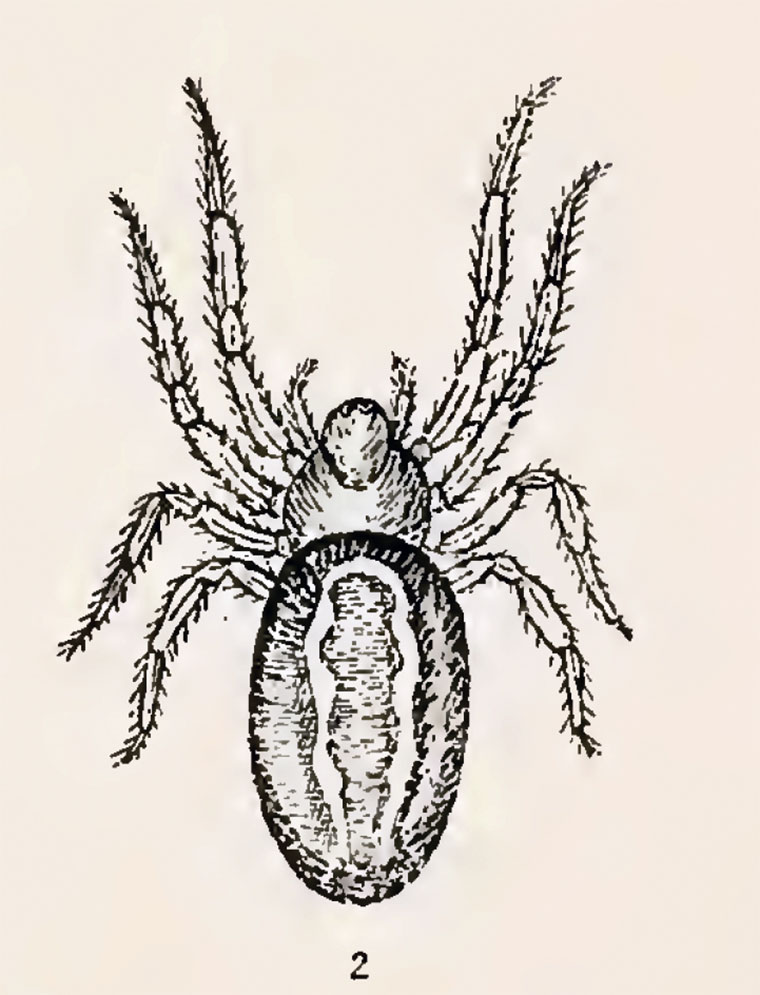 Illustration by W. J. Rainbow
Back : Next
View My Stats