The Cupboard Spider, or Brown House Spider is a black to purple brown spider with a pale speckled band on the anterior edge of the abdomen and three light speckled blobby marks behind, sometimes also on the sides. The abdomen is pea shaped. Fully grown females may grow to nearly 11mm. The males are smaller, to about 7mm. This spider is cosmopolitan, meaning found everywhere all over the world. Often found under loose bark or in leaf litter in eucalypt forest, it may also venture into houses. Its colour can range from black to brown, the colour possibly influenced by the surroundings. Food includes other spiders, even Redbacks. The female tends a white egg sac about 7mm in diameter. Being cosmopolitan this spider has been described many times under several different names. It was first named Aranea nocturna in 1781 by Shrank, but this name could not survive because it had been previously used by Linnaeus. Koch revised it to Theridion grossum in 1838 then changed it to Steatoda grossa in 1850. The generic name Teutana was popular for a while. It has been fairly consistently called Steatoda grossa since Levi's description in 1957. Steatoda comes from the Greek meaning tallow, that is, congealed and waxy. The Latin grossa means large. A rare bite can cause illness for a few days. 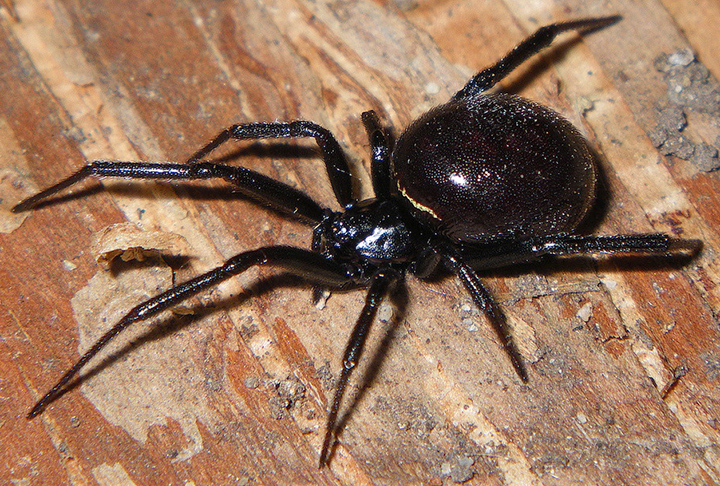 Photo Adam Parsons
Back : Next
View My Stats