This spider Steatoda grossa (C. L. Koch, 1838) Cupboard Spider is officially still Euryopis splendens until a revision is done. Rainbow described it as Phylarcus splendens, but it is actually a Steatoda sp. Rainbow described it as a dark spider with a yellow or lighter pattern on the abdomen and a lighter band on the leading edge of the abdomen. Eyes arranged in two rows of four each; front row more strongly recurved (outer eyes more towards the rear) than the rear row; lateral eyes contiguous; posterior row bright and glittering, the median pair exceedingly so; anterior row black; front median pair separated from each other by a space equal to fully once their individual diameter Legs dark like the cephalothorax, strong, rather short, tapering, hairy, and armed with short and moderately strong spines; relative lengths: 4, I, 2, 3· Abdomen large, overhanging base of cephalothorax, ovate, strongly arched, hairy, dark brown (almost black); superior surface ornamented in front with a recurved, reticulated bright yellow bar, and a broad, concolorous median design which commences well forward and terminates near the spinnerets ; within this median band there is a delicate scheme of tracery. Egg sac nearly globose, about the size of a pea, loosely woven, transparent, eggs round and of a pinkish tint. rainbow found it at Kitty's Creek, near Gladesville, Sydney, under stones. ♀ 8 mm ♂ 5 mm 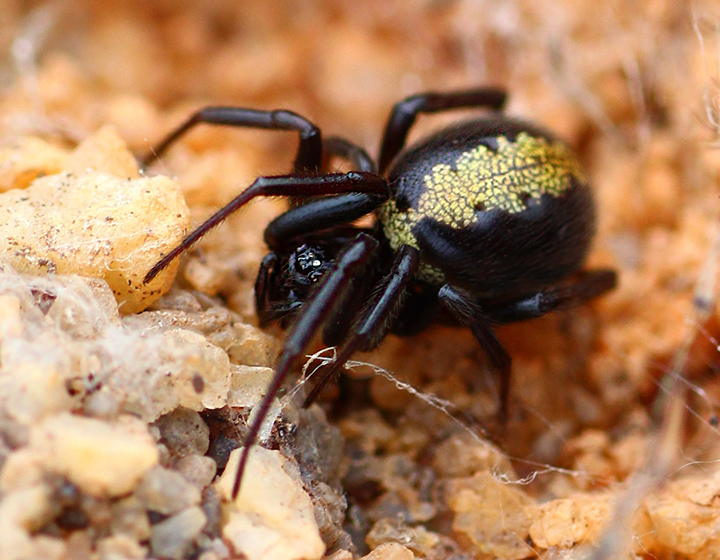