The largest and most robust species of Sandalodes. The male has cheliceral spurs (on the jaws) with distinctive protrusions and a fringe of blackish hairs on the front of the massive, dark chestnut brown cephalothorax, like forward pointing eyebrows. The face below the eye region is dark brown with short white hairs along its margin. Abdomen beige-brown to dark brown, with a light coloured band around the leading upper edge. The upper surface of the rear end of the abdomen has rather blobby transverse white stripes. First legs dark brown, remaining legs gradually lighter, to brown. The female's abdomen has a light central stripe and light band along the margins. The cephalothorax of the female is similar to the male's but the white hairs are more numerous, especially on the sides. The face below the eye region is brown with long white hairs. The species, being large and massive, can deliver a painful bite but without further consequences - at least from Marek Zabka's own experience when he revised the genus for his 2000 paper (Zabka, Invertebrate Taxonomy, 2000, 14, 695-704.) ♀ 11mm ♂ 13mm

Dr Greg Anderson remarked this was "a very large jumper. Would leap a 30cm gap without a problem." 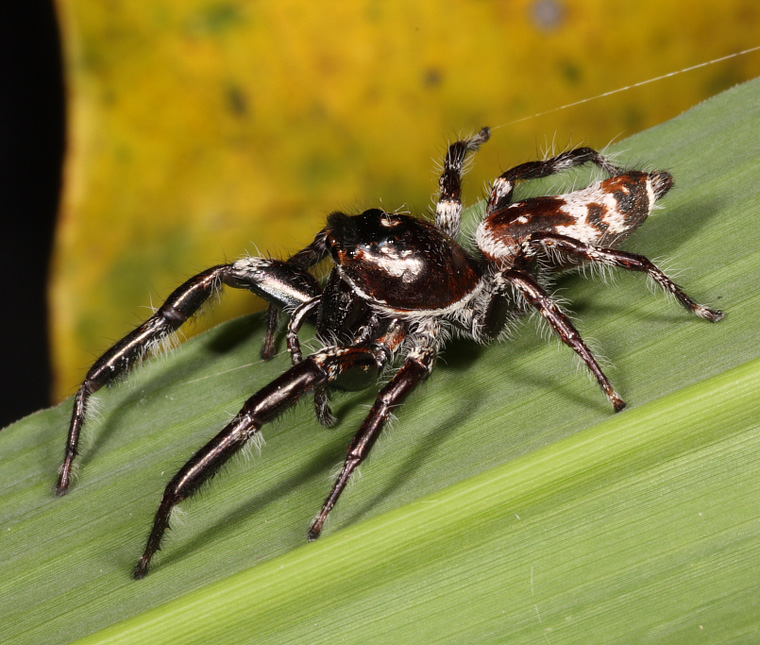